A zero-emission Canadian electricity system by 2035

In our new report, we explain how Canada can achieve a net-zero greenhouse gas emissions electricity system by 2035 and sustain it at net-zero as the total system doubles by 2050.

You can watch a 20-min interview with Markham Hislop of Energi Media in which I discuss key messages of the report.

This being a Canada-wide objective, we focus on zero-emission policies that the federal government could implement under its authority to set national GHG targets and implement policies of national reach to achieve them. Our federal policy focus is complicated, however, by the fact that the electricity sector is primarily under provincial jurisdiction, environment is a shared jurisdiction and Canadian courts support the “co-operative federalism” spirit of Canada’s Constitution.

While much of Canada is currently blessed with low-emission electricity from hydro and nuclear power — along with modest contributions from wind, biomass and solar power — some provinces still rely on GHG-emitting coal and natural gas power plants. This contrast in the carbon intensity of provincial electricity systems means that the costs of initially achieving net-zero electricity systems differ between provinces. We therefore propose to reduce divergent cost impacts of federal GHG policy by allowing those provinces with higher carbon-intensity electricity to transition more gradually. Thus, our proposed policies set a net-zero deadline of 2030 for B.C., Manitoba, Quebec, Newfoundland and Labrador and P.E.I., but of 2035 for Alberta, Saskatchewan, Ontario, New Brunswick and Nova Scotia.

Transitioning Canada’s current electricity system to net-zero is a big challenge. An even bigger challenge is to maintain that net-zero character while the system doubles in output over the next three decades, as electricity consumption replaces the use of coal, oil products and natural gas in transportation, buildings and industries. One constraint is that large hydro and nuclear power, the mainstays of Canada’s current electricity system, are unlikely to receive the same social and political licence for major expansion as in the 1960s to 1980s. Another constraint is that while carbon capture and storage (CCS) is an option for reducing 85 to 90 per cent of emissions from current and future coal and natural gas plants, this technology might also be seen as unacceptable in some locations and it does not by itself achieve net-zero emissions.

Fortunately, Canada’s geography provides favourable opportunities to develop wind and solar throughout the country, as well as region-specific biomass, small hydro and some geothermal. And while the electricity output of solar, wind and small hydro plants is variable (hence non-dispatchable), these sources can be integrated with energy storage as well as with incentives to adjust the timing of electricity demand (load shifting). Ideally, grid-connected, non-dispatchable generators anywhere in Canada would also benefit from the enormous energy storage of Canada’s existing hydropower reservoirs, but nationwide utilization of this resource requires expanded grid interconnection between provincial electricity systems.

Canada’s Supreme Court has affirmed the Canadian government’s right to set national GHG emissions targets and implement carbon pricing and emissions-intensity regulations as part of its nationwide effort to achieve these targets. But the federal government does not have a free hand, especially in the electricity sector. Electricity investment and dispatch decisions in Canada are made by private and public corporations (and some municipal utilities) in a complex policy, regulatory and ownership landscape that is dominated by provincial governments. Most provinces have provincial Crown corporations involved to varying degrees in generation, transmission, distribution and system operation. All provinces have an electricity regulator. And all provinces have policies to reduce GHG emissions from electricity generation, although these differ significantly between provinces and collectively neither achieves Canada’s 2030 Paris GHG commitment nor puts it on a trajectory to achieve its 2050 net-zero commitment.

In the case of electricity GHG emissions, two federal policies are key. First, the federal government has an emissions performance standard under the Canadian Environmental Protection Act that sets maximum emission limits of CO2/kWh for electricity generation plants. The latest version of this standard will force the closure of coal-fired power plants by 2030 if they have not installed effective CCS, but it does not prevent the ongoing operation of existing natural gas plants without CCS, nor of coal plants converted to natural gas without CCS.

Second, the federal government has a price on carbon it can apply to electricity plants via its industrial output-based pricing system (OBPS) under the Greenhouse Gas Pollution Pricing Act. As applied to electricity generators, the OBPS sets benchmark emission intensity standards for each category of generator and charges the carbon price only on emissions exceeding the standard. This incentivizes some emissions reductions without causing significant increases in electricity rates in the provinces with coal and natural gas generators, because only a percentage of emissions are charged the carbon price. However, its benchmark standards allow ongoing GHG emissions beyond 2030 from existing natural gas plants, as well as from coal plants that have been retrofitted with CCS or converted to natural gas.

Given the necessity of a Canadian shift to zero-emission electricity, we propose that the federal government adjust the stringencies of these two policies to ensure that electricity generation in every Canadian province is net-zero by 2035 at the latest, and remains that way as the system grows to 2050. Specifically, the carbon intensity standard should fall to net-zero CO2/kWh by 2030 in provinces dominated by hydro, nuclear and wind, and by 2035 in provinces currently relying on some coal and natural gas. And the OBPS, as applied to all electricity generators, should adjust the benchmark standards until 100 per cent of electricity-related GHG emissions are charged the rising carbon price that is currently applied to fuels, albeit again with different 2030 and 2035 deadlines depending on the province. This increase in coverage would occur as the carbon price rises on its announced path to $170/tCO2 in 2030 and then continues rising to $300/tCO2 and perhaps higher by 2050 if necessary to achieve the net-zero national target.

To illustrate the effect of these policy adjustments, we simulate two possible technology pathways for zero-emission electricity in all Canadian provinces by 2035. (In an appendix we also provide the outcome for northern territories.) In both pathways, we assume that provinces will not allow substantial expansion of large hydro and nuclear power, meaning that wind, solar and other renewables dominate generation growth. In both, we assume that the capacities of transmission grid interties between provinces will not be substantially increased, given past reluctance for expanded interdependence. And in both, we assume significant development of energy storage and load shifting to ensure reliable systems as the contribution of variable electricity from wind and solar increases.

The paths differ, however, in that in one we assume that some provinces will develop zero-emission options that are currently seen as acceptable by their governments. These include the substantial use of natural gas with CCS (and possibly bioenergy with CCS) in Alberta and Saskatchewan, and further development of large hydro in the Atlantic provinces (Gull Island) to take advantage of the new undersea transmission links. In the other path, we assume these developments don’t occur, requiring instead even more wind, solar and other renewables, as well as the additional energy storage these require.

We estimate this second path as costlier. But that is based on current cost estimates of the various resource options. We note, however, that the eventual outcome could be reversed, especially given the recent experience of major cost overruns of two recent Canadian investments in large hydro (Muskrat Falls and Site C) and one electricity CCS project (the Boundary Dam coal plant).

We propose that the federal government continue to present its policies as backstops that can be superseded by equivalent provincial policies. However, the federal government must ensure that this co-operative approach does not result in reduced stringency by granting equivalency to provincial policies that are less likely to achieve a national zero-emission electricity system. To that end, we propose ongoing independent oversight of federal-provincial equivalency agreements by Canada’s Net-Zero Advisory Body, using the assessment expertise of the Canadian Institute for Climate Choices.

We also propose that the federal government encourage multi-government equivalency agreements with two or more neighbouring provinces that wish to be treated as one entity for the purpose of electricity-sector GHG emissions. Dramatic increases in wind and solar over the next decades will require massive investments in energy storage, especially in provinces that lack large hydro reservoirs. These costs can be significantly lowered if federal policy promotes expanded grid interties between hydro reservoir–endowed provinces and their neighbours. However, given the primacy of provincial jurisdiction in electricity, this cost-saving interprovincial system co-ordination will only happen where provincial governments are willing. In this regard, the past decade has witnessed promising developments at least in the Atlantic provinces with the development of the Maritime Link transmission line.

As noted, our report is about federal policy to achieve a national objective, that being a zero-emission Canadian electricity system. Our report is thus silent on many other policy concerns of electricity system stakeholders. These unaddressed topics include centralized versus decentralized generation, economically efficient system operation, the pros and cons of public versus private ownership, financing capacity investments, electricity affordability, electric utility regulation, transition support for displaced workers, reliability of electricity generation and distribution as non-dispatchable renewables and electricity demand peaks increase, non-GHG environmental and social trade-offs of alternative zero-emission electricity options, cost-effective energy efficiency and load shifting, innovation and adoption in energy storage, reconciliation with Indigenous Peoples, and special challenges of zero-emission electricity in remote and northern communities. Many of these issues will be primarily addressed by provincial governments, each with their own priorities and preferred methods. However, the federal government must play a key role in supporting the net-zero transition in Indigenous and northern communities, given its clear constitutional responsibilities in these areas.

Posted by Mark Jaccard at 17:05 No comments:

Interview on 'The Strong and Free Podcast' 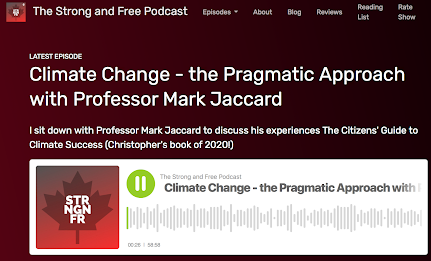 Really engaging discussion about my latest book, The Citizen's Guide to Climate Success' with Christopher Balkaran on his podcast The Strong and the Free (referring to the line in the Canadian national anthem, "the true north strong and free" is based on the Lord Tennyson's description of Canada).

Posted by Mark Jaccard at 15:12 No comments:

Citizen's Guide 4 min videos: What is the best climate policy?

Posted by Mark Jaccard at 07:31 No comments:

Here is the video recording of my Question and Answer session on The Citizen’s Guide to Climate Success on May 12, 2020. Thank you to the group, Climate Crisis Legislation Needed Now, particularly Ken Johnson and Kathleen O’Hara.
Posted by Mark Jaccard at 20:51 No comments:

Here is the link to the video of my public talk hosted by Academics for Climate - University of Regina held via Zoom on April 28, 2020 entitled 'Emergency: The Citizen's Guide to Climate Action'. This Zoom talk is part of the Academics for Climate Community Series: Towards a Better Understanding of Climate Change in Saskatchewan, an interdisciplinary series designed to increase public understanding of climate change and its range of impacts - local and global. My talk was in co-sponsorship with Johnson Shoyama Graduate School of Public Policy through the Centre for the Study of Science and Innovation Policy (University of Saskatchewan), and Now What?!. 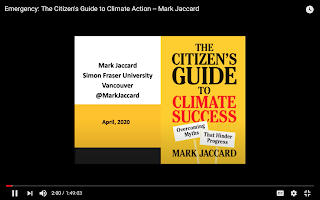 Posted by Mark Jaccard at 07:13 No comments:

'A Climate of Change' Interview

My May 7, 2020 interview on the Calgary Climate Hub's 'A Climate of Change' discussing my new book and what actions people can take to help stop climate change. 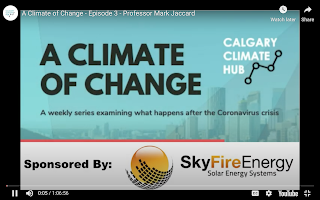 Posted by Mark Jaccard at 07:05 No comments:

Here is a link to the a talk I gave on Feb. 26 in Hamilton, Ontario to the Bay Area Climate Change Forum. The event was supported by the Centre for Climate Change Management, in partnership with the Cities of Hamilton and Burlington, and the Ministry of the Environment and Climate Change. 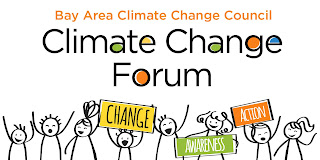 Posted by Mark Jaccard at 14:47 No comments: