My #KeystoneXL and #COP21-related media blitz

I have given a large number of interviews to media outlets in the past few weeks  relating to President Obama's rejection of the Keystone XL pipeline, COP21: The 2015 Paris Climate Summit and recent Canadian climate policy developments and potential. Links and brief descriptions are below:

“Policy academics are cheap dates.” One of my mentors, professor Aiden Vining, loved saying that. His point was that we policy academics will gladly pay for our own dinner if we think that a politician, of any political stripe, wants our advice. This explains why, in my 30 years of climate policy research, I have willingly advised Conservatives, Liberals, NDP and Greens, sometimes when in power, sometimes in opposition. Once, a politician actually paid for my dinner – at McDonalds.

I have learned some things that are relevant to this federal election. One lesson is that climate policy is really, really hard. Our political system has strong incentives for politicians not to implement effective climate policies. To be effective, policies must either price CO2 emissions or regulate CO2-causing fuels and technologies. These compulsory policies impose short-term costs (real and perceived) on some people, some of whom will wage war on the guilty politician. As in all wars, truth is the first casualty: the climate policy and its implementing politician will be blamed for completely unrelated misfortunes by these people, powerful backers, and a media that loves attacking politicians.
Read more »
Posted by Mark Jaccard at 21:58 2 comments:

Executive Summary
Over the past three decades, governments in developed countries have made many commitments to reduce a specific quantity or percentage of greenhouse gases by a specific date, but often they have failed to implement effective climate policies that would achieve their commitment. Fortunately, energy-economy analysts can determine well in advance of the target date if a government is keeping its promise. In this 2015 climate policy report card, I evaluate the Canadian government’s emission commitments and policy actions. I find that in the nine years since its promise to reduce Canadian emissions 20% by 2020 and 65% by 2050, the Canadian government has implemented virtually no polices that would materially reduce emissions. The 2020 target is now unachievable without great harm to the Canadian economy. And this may also be the case for the 2050 target, this latter requiring an almost complete transformation of the Canadian energy system in the remaining 35 years after almost a decade of inaction.

First, significant CO2 emissions reductions require ‘compulsory policies’ – regulation of technologies and energy forms and/or pricing of CO2 emissions – and these are seen to cause immediate costs for some even though the long-term benefits for society exceed these costs. These immediate costs would begin during the mandate of current politicians, and have significant political risks, while the benefits of avoiding climate change will mostly occur after the career of current political leaders.

BC and LNG: Better Late or Never

By Mark Jaccard and Tom Gunton
Originally appeared in the Vancouver Sun October 14, 2014

Increasingly, one hears our government has moved too slowly, just as a prospector arriving too late to a gold rush. But this argument reflects a fundamental misunderstanding of today’s natural gas market. It can have potentially harmful repercussions for our economy and environment. Here is why.
Read more »
Posted by Mark Jaccard at 07:23 No comments:

Email ThisBlogThis!Share to TwitterShare to FacebookShare to Pinterest
Labels: BC, LNG, Natural Gas

Here is the announcement for my my VPL talk to be held Thursday Feb. 5, 2015 at 7 pm at the Vancouver Public Library.  Click on it for a larger view. 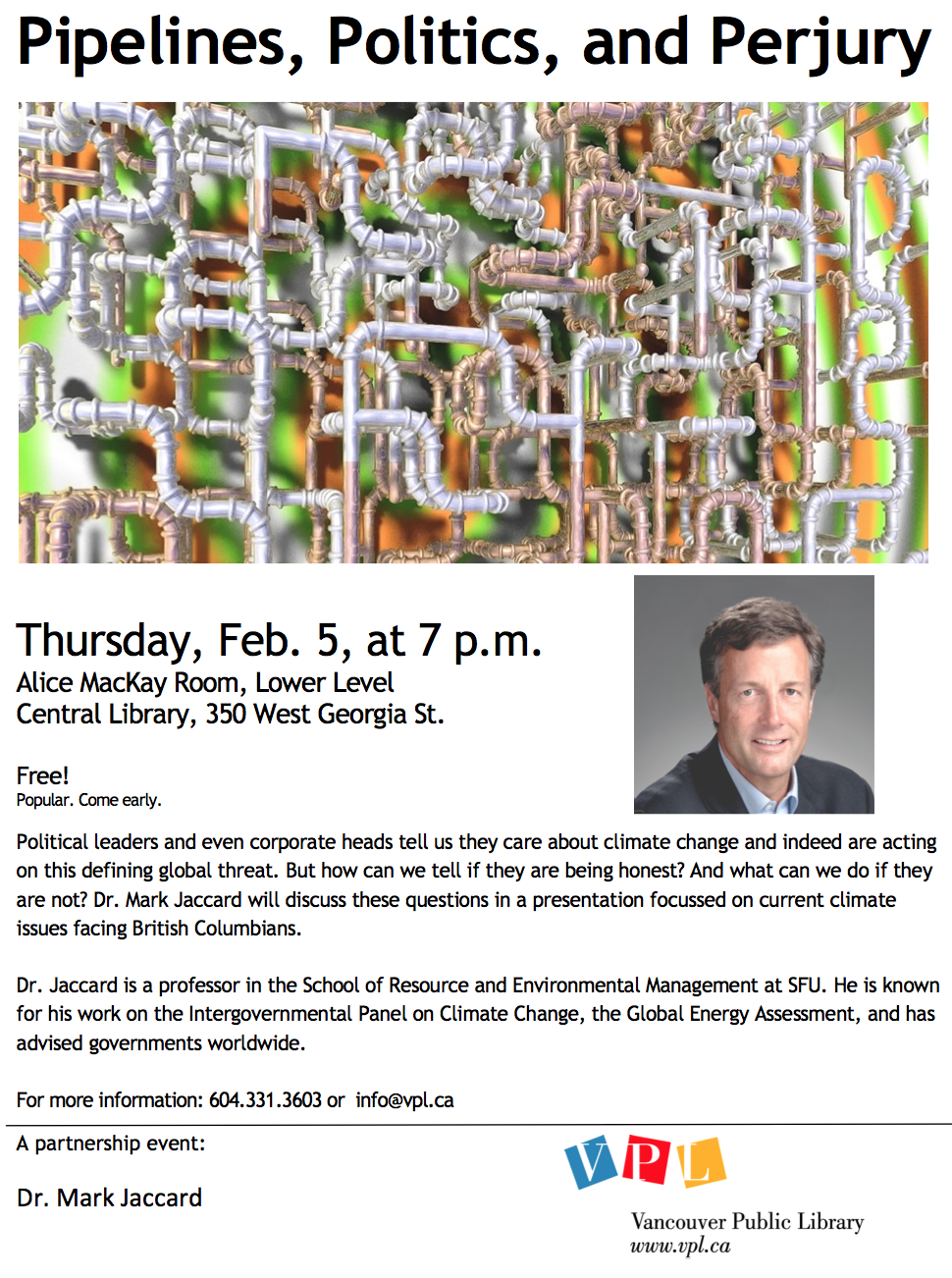 Here is the VPL link.

Posted by Mark Jaccard at 10:40 No comments:

It is amazingly difficult to get people to understand that if humanity acts seriously to reduce CO2 emissions, the price of oil would fall to very low levels - and stay there. In this op-ed in the Globe and Mail in December 2014, I explain the competitive drivers of oil prices, and why these prices have been really low for most of the past 100 years, even though human self-deception has most people thinking otherwise. In future op-eds and blogs I will present our research of the last two years on the path and level of the price of oil.

Oil Prices: A Lesson in Markets

For 27 years in my graduate energy seminar, I’ve struggled to convince bright master’s and PhD students that oil prices might actually result from competition rather than a price-fixing conspiracy of oil companies and the Organization of Petroleum Exporting Countries cartel. But this year, my task was easier.

We start by reviewing several commodity prices – potash, lumber, copper, oil – which show that the oil market is not atypical. We see that all oil producers receive the same price, which is usually at or above the production costs of the most expensive suppliers, such as Alberta’s oil sands and North Dakota’s shale and tight oil. Low-cost producers, like Saudi Arabia, get more profit from each barrel.
Read more »
Posted by Mark Jaccard at 16:14 No comments: